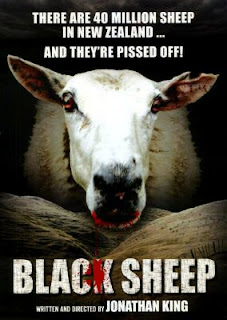 I saw a movie review on that Ebert/Roeper show this past weekend about killer sheep. The movie's name is Black Sheep and both reviewers panned the movie. I thought the clip they showed was funny but I suspect the one-joke nature of the movie would be hard to sustain over the course of a feature length film.

They compared Black Sheep to the Evil Rabbit scene in Monty Python and the Holy Grail--which I think is good company to be in.

"That's the most foul, cruel, and bad-tempered rodent you ever set eyes on! " LOL

But in honor of the film Black Sheep, whether a good movie or bad, I'm presenting a short collection of "Sheep jokes". Be warned, many contain inferred sexual content! They're also often not kind to the Welsh. It makes me wonder just what goes on in those pretty green fields of Wales...


What's the fastest thing in Wales?


What do you call a Welshman with 500 girl friends?


Where does virgin wool come from?


Why are Border Collies so quick on their feet? 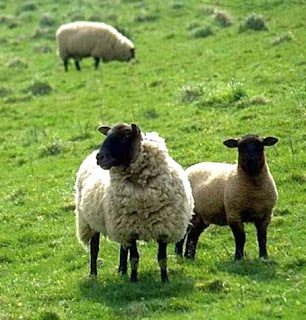 Two guys are walking through the woods and come across this big deep hole.

"Sure does... toss a few pebbles in there and see how deep it is."

They pick up a few pebbles and throw them in and wait... no noise.

"Jeeez. That is REALLY deep... here.. throw one of these great big rocks down there. Those should make a noise."

They pick up a couple football-sized rocks and toss them into the hole and wait... and wait. Nothing.

They look at each other in amazement. One gets a determined look on his face and says, "Hey...over here in the weeds, there's a railroad tie. Help me carry it over here. When we toss THAT sucker in, it's GOTTA make some noise."

The two men drag the heavy tie over to the hole and heave it in. Not a sound comes from the hole. Suddenly, out of the nearby woods, a sheep appears, running like the wind. It rushes toward the two men, then right past them, running as fast as it's legs will carry it. Suddenly it leaps in the air and into the hole.

The two men are astonished with what they've just seen...

Then, out of the woods comes a farmer who spots the men and ambles over. "Hey... you two guys seen my sheep out here?"

"You bet we did! Craziest thing I ever seen! It came running like crazy and just jumped into this hole!"

"Nah," says the farmer, "That couldn't have been MY sheep. My sheep was chained to a railroad tie."


What is the difference between a Rolling Stone and a Scotsman?

A young man grew fed up with modern life and decided to leave the big city and become a shepherd, spending months in the seclusion of the distant mountains alone with his thoughts and sheep. So he went up the high mountains where he found three older shepherds with a big flock of sheep, and asked them to show him the ropes. The shepherds agreed.

The young man spent a week with them. One evening by the fire he asked casually, 'So how do you guys get by with no women around here?' Said one of the men,'Why, with so many sheep around, who needs women?' The youngster shuddered: 'Yak! How horrible! How can you...?' The three men only smiled and said nothing.

Another week passed and one morning the young man realized that the tension in his groin had grown unbearable. He remembered what the men hadsaid, and looking at the sheep, thought, 'Hmm, why not after all...'. He chose a moment when none of the older shepherds were around, and grabbed one of the nearest sheep. However, the others showed up in a minute, and seeing him with the sheep burst out laughing.

'Yeah, sure! But you choose the ugliest one!!!'

A man buys several sheep, hoping to breed them for wool. After several weeks, he notices that none of the sheep are getting pregnant, and calls a vet for help. The vet tells him that he should try artificial insemination.

The guy doesn't have the slightest idea what this means but, not wanting to display his ignorance, only asks the vet how he will know when the sheep are pregnant. The vet tells him that they will stop standing around and will, instead, lay down and wallow in the grass when they are pregnant.

The Man hangs up and gives it some thought. He comes to the conclusion that artificial insemination means he has to impregnate the sheep. So, he loads the sheep into his truck, drives them out into the woods, has sex with them all, brings them back and goes to bed.

Next morning, he wakes and looks out at the sheep. Seeing that they are all still standing around, he concludes that the first try didn't take, and loads them in the truck again. He drives them out to the woods, bangs each sheep twice for good measure, brings them back and goes to bed.

Next morning, he wakes to find the sheep still just standing around. One more try, he tells himself, and proceeds to load them up and drive them out to the woods. He spends all day shagging the sheep and, upon returning home, falls listlessly into bed.

The next morning, he cannot even raise himself from the bed to look at the sheep. He asks his wife to look out and tell him if the sheep are laying in the grass. "No," she says, "they're all in the truck and one of them's honking the horn."

Two Aussie Kiwi sheep drovers are sitting in their tent after a hard days work. Because of the size of the property they work on, they are miles from home. In fact, they're bloody miles from anywhere, totally the back of beyond. They are both enjoying a beer under the shade of the awning of their tent when a man in a pin-striped suit, carrying a small brown briefcase and wearing a bowler hat passes by.

"Go and see who that bloody clown is, Bruce, he must be lost," says the senior of the two.

So Bruce scampers off after the city type gent. After about fifty yards he catches him up.

"Scuze me mate, are you bleedin' lost or summat."

"Not at all, my man. I am conducting some field work connected with my employment." was the haughty reply.

"You must have a funny kind of job, mate. What do you do for a living?" said the drover.

"I am a taxidermist."

"No good you being out here then, there's no taxi's in the outback."

"You don't understand, I stuff animals for a living."

The drover is shocked but eventually asks, "What sort of animals do you stuff?"

"Well, I've stuffed all sorts in my time, fish, birds, snakes, rabbits, crocodiles and I even stuffed an emu once."

The drover is now very suspicious,

"You ever stuffed a sheep?"

When the sheep-man eventually returns to the tent his mate asks,

"Well, who was that bloody Charlie?"

"Nobody special," was the reply, "Just another drover."
black sheep jokes sheep

SassyAssy said…
I noticed you posted this at 2:40am....I would think with the hot girlfriend you would have better things to do at that time of the morning then post sheep/sex jokes....thanks for the laugh btw.
8:06 AM

Olyal said…
The sheep jokes lured me back. However, I don't appreciate the intimation that Australians fornicate with sheep. We leave that to the New Zealanders!
I'm still alive and will hopefully get a post up on the blog tomorrow or over the weekend.
:o)
6:21 PM

Anonymous said…
Did you know many persian eat sheeps' head and face must include?

It's quite a delicous dish if you're healthy and thin.

Anonymous said…
Ah I love a little sheep sex humor in the mornings! Thanks!

Lois Lane said…
SURE it was all because of the movie!!! You are one Baaaaad boy!
2:14 PM 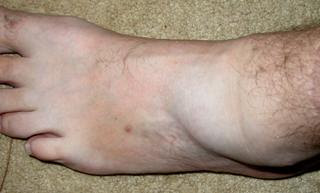 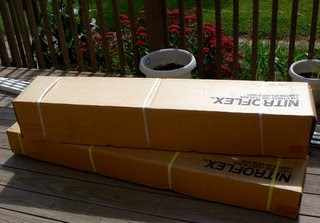